The light at the end of the tunnel

Although Europe currently is suffering from a second round of COVID-19 lockdowns, as we edge out of the pandemic the markets will start to recover from as early as 2021.

That was the key conclusion from the Nordic Client Forum webinar on November 11th, where some of CBRE’s global and regional leaders presented to around 300 clients for an insight into how current events have impacted the commercial real estate market.

What is going on in the US?

CBRE’s Chairman of Americas Research Spencer Levy kicked off the event with a review of the results of the US elections and the implications it has for the economy and real estate market.

Even though Donald Trump is challenging the result, almost everyone has called that Joe Biden won the presidential election. On the back of this, the market moved up substantially last week. Not just because of the election of President Biden, but also because we’re likely to have a split government, which Spencer cited is good from an economic point of view.

Levy also reflected on the recent watershed news that Pfizer and BioNTech announced a COVID-19 vaccine that has been found to be 90% effective, with the possibility of it being administered globally as early as December. The news was received well by the market, with some real estate indices up by double digits and some REITs rising more the 30%.

"We’re seeing the light at the end of the tunnel, and we have more political clarity, meaning that the outlook for 2021, which was good, has become even better", Levy emphasized. 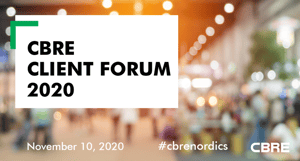 Great confidence in the market – overview of the European markets

Jonathan Hull, Managing Director Global Accounts, acknowledged the severity of COVID-19 on European property investment volumes, which in Q2-Q3 were down more than 40 percent. However, he argued that the worst is behind us and that a recovery is due.

"We are expecting Q4 figures to improve significantly. It is primarily the travel restrictions that have stopped people launching new products because I think there continues to be great confidence in the market", he said.

Hull pointed out that he has already started to notice capital starting to flow from key Asian markets like Singapore, Hong Kong and South Korea to Europe again, which is a positive sign.

"Perhaps this is something we can benefit from as we move into 2021, as travel restrictions will be eased."

Both Levy and Hull underlined that industrial & logistics will be the first asset class to recover, and that they in fact have started to see this already.

"The big uptick in ecommerce and the implication this has for logistics is the big story of 2021 (…) And this is going to continue", Hull said.

"In fact, we were too pessimistic about industrial & logistics. The market came back almost immediately, it took a month and now we’re seeing record pricing in markets across the board", Levy added.

Significant variations within the Nordics

Sami Kiehelä, Head of Capital Markets Nordics, offered a perspective on the Nordic countries and highlighted that through the pandemic the investment market in these four countries has fared quite differently. He said:

"Norway investment volumes were only down 16 percent in Q2-Q3 against the five-year average, while Finland on the other was down a staggering 74 percent. This is largely explained by the dependency on international capital. Norway is dominated by domestic buyers, while in Finland, more than half of the investment volume over the last five years comes from international capital", he said, also emphasizing that Sweden is more similar to Norway, and Denmark to Finland.

Kiehelä also highlighted that Norway was one of the few western countries that actually had a significantly positive central bank key policy rate going into the crisis, which allowed the Norges Bank to cut interest rates significantly, which has contributed to support the domestic investment activity in 2020.

However, Kiehelä also signalled that the stage now is set for a recovery, particularly citing the high amount of capital that is only waiting to be deployed, having grown significantly through 2019, but not being deployed so far in 2020.

"The Nordics is clearly a key target region for most of this capital, which suggests an increase in activity as the health situation improves", he said.

Head of Research in the Nordics, Amanda Welander underlined that although a recovery is set to begin in 2021, it is also clear that the recovery will take time. However, Welander pointed out that generally, the Nordic economies, both nationally and the capital cities, are doing significantly better than many other in Europe.

Welander suggested that the sector breakdown of the local economies in the Nordics can help in explaining why the Nordic capital cities are doing relatively well.

"The sectors that are hit the hardest by COVID-19 generally aren’t very big in the capital cities", she said, pointing out that sectors like finance have only experienced a marginal contraction in value creation. 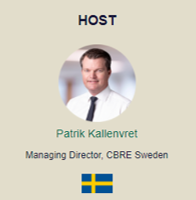 The seminar was hosted by Patrik Kallenvret, MD, CBRE Sweden.

Please contact Einar if you have questions or if you would like to book a meeting with him or his colleagues.

Einar is Senior Analyst in the Research division at CBRE in Norway, and part of the wider Nordics and Europe research teams. Specialist at commercial real estate investments and Norwegian office markets.
Mobile Phone: +47 94 14 14 84